I had the privilege of attending the General Assembly of ISTQB and adjacent Software Testing Seminar in Seoul, South-Korea last week. I got a deep-dive into insights about where software testing field is going. Artificial Intelligence support for software testing, test automation and continuous delivery, non-functional testing and model-based testing seem to be the big trends, not forgetting the ever-increasing rise of agile testing (and of agile projects). Seoul itself is a city of contrasts of different world's living nicely together in harmony, which I find a nice analogy to place on software testing within software development. 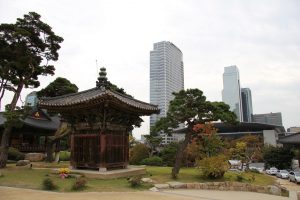 The General Assembly featured ISTQB Award giving ceremony, where Mr. Robert V. Binder was given International Software Testing Excellence Award 2016. The Award Committee selected Mr. Binder in recognition of his commitment to software quality and the testing profession over the past 24 years, as serial entrepreneur, author, model-based testing specialist, IEEE Senior Member and Carnegie Mellon University’s Software Engineering Institute member (see more). Congratulations Bob, it was an honor to meet you!  I was also most impressed about Bob's thank you speech.

In the recent survey ISTQB asked the world about what is important in testing, and non-functional testing and test automation featured very high on the list. To be more specific security testing, usability testing, performance testing, mobile testing and test automation are topics of very much interest to tester's today. As expected, ISTQB and its stakeholders are producing now learning materials and exams for these purposes.  Testing tools, agile practices and testing budgets are also increasing. You can read more in the report

In the adjacent testing seminar I was able to hear more about some interesting developments, which will be trends in near future, if not yet. Artificial Intelligence support for testing is such an area. There's been much discussion about it as well in Finland. Stuart Reid's keynote revealed that AI testing is actually much more common place even today, and there are more tools than you'd imagine. Everyone has heard about IBM Watson. But have you heard about Microsoft CNTK, Google TensorFlow, Torch, Caffe or Theano? There are many tools out there and they don't even cost a lot in many cases. There was an excellent example about comparing some testing with fuzzing tool (where random data is generated) and with AI supported testing.  AI's intelligent support enabled better results with only a fraction of test steps. AI testing can give us more testing in less time, and let tester's do more demanding tasks. Yet more tools to help testers!'